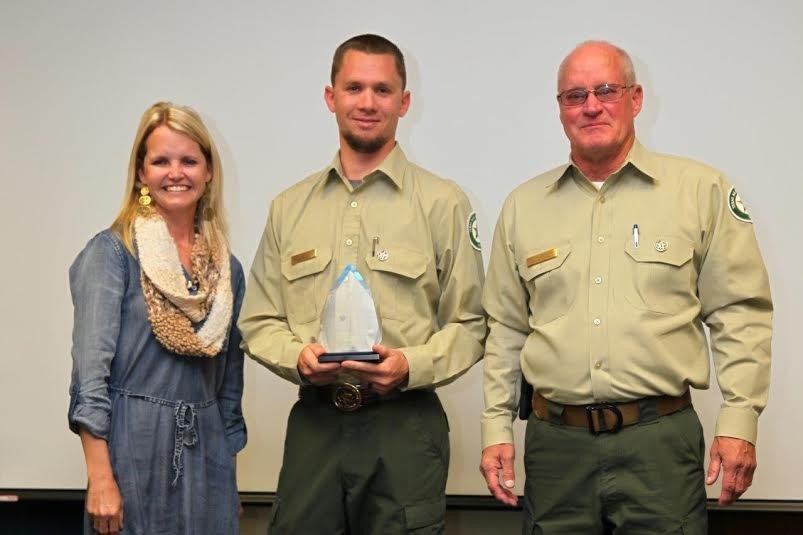 On March 28, 2016, the Wolfforth Chamber of Commerce hosted it’s Annual Awards Banquet at the Casey Professional Building. Following entertainment by members of the Frenship High School Choir and a meal catered by Abuelo’s, awards were handed out to several members of the Wolfforth Community.

Vikram Baliga and Adeline Fox – Honored for their many contributions to the Wolfforth Water Expo and the creation of the Expo Mascot Walter Drop. Vikram and Adeline gave many hours of their time to organize, support and plan the Expo and also in creating the charismatic character, Walter Drop. This year’s Expo will be help at Frenship High on Saturday, April 23 from 11am to 3pm. Educational speakers, children’s activities and vendors will be set up throughout the Student Center at FHS. The mission of the Expo is to  increase the awareness of water scarcity while educating the people of West Texas in the conservation and wise use of our limited water supply. Entry to the Expo is free for all. Check out Walter Drop’s YouTube Channel! https://www.youtube.com/channel/UCVVFtaHPI0txV7Nkbv0jhEQ

Texas A&M Forest Service – The Texas Forest Service has made their home here in Wolfforth and quickly jumped right into the community. They have participated in National Night Out, the Wolfforth Christmas Celebration and the Wolfforth Harvest Festival and Parade. TFS is one of the lead agencies for incident management from initial response to ongoing recovery during wildfires and other types of disasters. Just last week, TFS responded to four fires in Wheeler, Hutchinson, Carson, Roberts and Gray counties which burned over 50,000 acres.

Wolfforth Emergency Management – Winter Storm Goliath lived up to it’s name when it brought blizzard conditions to the South Plains in late December 2015. This storm dropped over 11 inches of snow and also brought 40-80 mph winds to our area. Wolfforth Emergency Management was tasked with clearing roads, maintaining access for medical personnel and keeping the City operational. Many thanks to all those who helped cope with Goliath including our Public Works Department, First Responders, Fire, EMS, and Police as well as many community members.

Elisha Reese – The giving of your talents in helping other is one of the greatest blessings you can give. The Wolfforth Chamber of Commerce has been greatly blessed by Elisha Reese over the last year. She is amazing with technology, graphic design, and generally anything you ask her to help with. Everything she touches turns to gold! She gives freely of her time and talents to many in our community and school district and we are honored to recognize her generous spirit with our Spirit of Wolfforth award.

Opened in February of 2015, Evie Mae’s BBQ has put itself on the map as one of Texas’ best BBQ joints and we are proud to be their home. They have received many awards this year along with golden reviews. Texas Monthly BBQ gave them rave reviews back in the fall and the also received recognition as one of the top 25 BBQ Joints in Texas by Texas Montly. Evie Mae’s began their BBQ journey in a food truck located west of FM 179 on the 62/82 access road but will soon move into their new brick and mortar location. Watch for their opening on April 21st at the corner of FM 179 and the south access road. Thank you Evie Mae’s BBQ for choosing Wolfforth as your home!

The Chamber would like to thank everyone for coming out to this year’s Annual Banquet. It is a pleasure to honor those community members and teachers who make Wolfforth “the place to be”. Special thanks to our sponsor for the night Xcel Energy. Chamber membership is open to all businesses, individuals, families and non-profits in the area. We greatly appreciate the support of all our members! For more information on joining the Chamber or on upcoming Chamber events, call 806-855-4159 or email info@wolfforthchamber.org