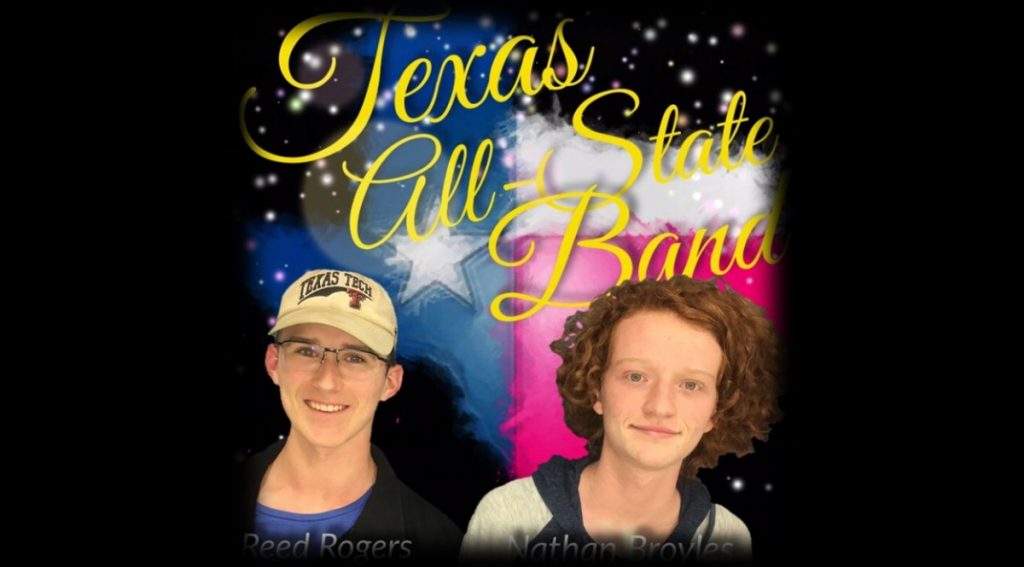 They were chosen for this prestigious honor through a competitive process held this year across the state at District, Region, and Area levels. Frenship students competed with other schools from the Permian Basin, West Texas, El Paso and Texas Panhandle areas.

Rogers, a baritone saxophone player, and Broyles, a contrabass clarinet player, will each perform for the first time as members of a TMEA All-State organization. Rogers is the son of Ricky and Julie Rogers. Broyles is the son of Danny and Devon Broyles.

Additionally, four FHS students who earned First Alternates to the All-State Band. The alternates include Christian Lopez, Ashley Gray, Justin Kennon, and Tristan Nock.
High school students selected to perform in the All-State concerts have competed through several levels of auditions beginning in the fall of 2016 to qualify at the state level. All-State is the highest honor a Texas music student can receive.

Students are selected through a process that begins with over 68,000 students from around the state vying for this honor to perform in one of 15 ensembles (bands, orchestras, and choirs).

Texas Music Educators Association sponsors the Texas All-State competition. This competitive process begins throughout the state in auditions hosted by 33 TMEA Regions. Individual musicians perform selected music for a panel of judges who rank each instrument or voice part. From this ranking, a select group of musicians advances from their Region to compete against musicians from other areas in seven TMEA Area competitions.

The highest-ranking musicians judged at the TMEA Area competitions qualify to perform in a TMEA All-State music group. Only the top two percent of musicians who initially audition become All-State musicians.