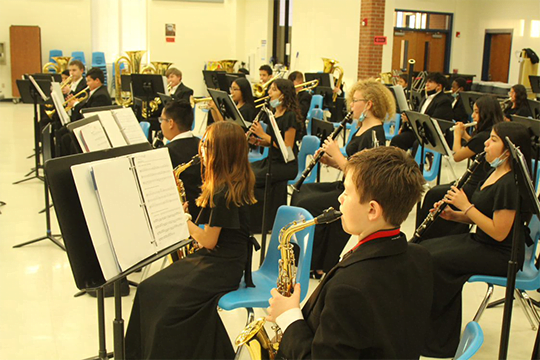 Last year, the TVMS Band broke a school record when 27 students made the Middle School All-Region Band. Last month, they set the bar even higher when 31 students placed in this year’s competition.

TVMS Band Director, Roel Sanchez, said that while breaking the record is exciting and the number of students that made the All-Region Band is great, he is most impressed with how well the students performed, even at a disadvantage.

“The seventh graders are what I am most excited about,” Sanchez said. “This competition already heavily favors eight graders; they are typically more experienced and better prepared. But this year, since the seventh graders missed half of their sixth grade school year last year, which is a big hunk of learning and exploring their instrument, we were a little nervous about how they would perform.”

Sanchez said that though they had such a set back last year, he and his colleagues did as much reteaching and retraining as possible.

“When we got here this year, everything we have done like rewriting our curriculum, doing sectional work, it has all be about plugging those gaps,” Sanchez said. “We had 17 seventh grade students, out of our 31 kids, that made All-Region Band.”

Sanchez said prior to the competition, he heard other school band directors say that they did not think their seventh grade students would do well. He said that made him work with his students even harder to make sure they were prepared.

“Even the trombone player that got first chair for the whole area was one of our seventh graders,” Sanchez said. “Our entire clarinet section came out in the top eight of the entire competition and it is basically made up of seventh graders.”

Sanchez said that he is proud of the eight grade students for being so patient with the curriculum change.

“As we were working in class on the skills and be patient with the seventh graders who didn’t get all of that instruction, the eight graders really understood why we shifted things around,” Sanchez said. “I would catch eight graders pulling seventh graders aside to coach them and I would catch them being leaders and offering help. It has just been really cool to watch.”

Sanchez said his student were excited when they heard the results of the All-Region competition.

“We were in class and we would call out kids names, and they were just saying things like ‘WOAH! No way! Seventh graders beat eighth graders!’ and that kind of feeling was so good,” Sanchez said. “Just seeing them so happy.” 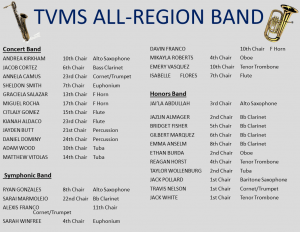