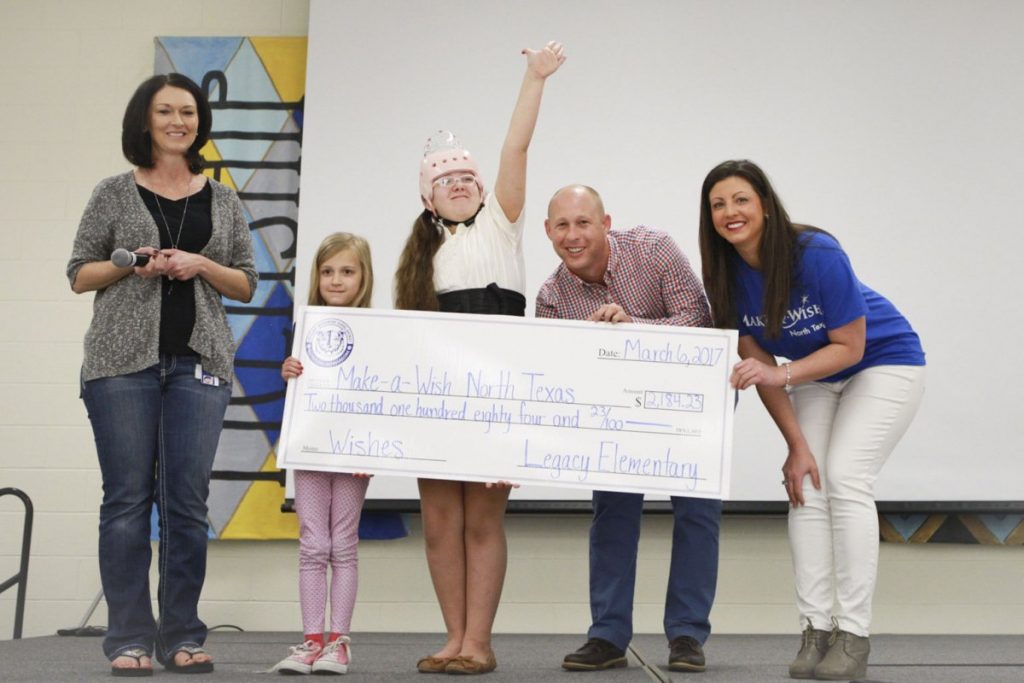 The donation helps grant wishes to children diagnosed with a life-threatening medical condition.

It was a bright Monday morning at Legacy Elementary as the students and staff presented a check to the Make-A-Wish North Texas Foundation for $2.184.23 after each grade competed in penny wars.

The money was raised in honor of two Legacy students — Gentry McDaniel and Ardyn Foster — who both had their wishes granted by going to Disneyworld to see the real Disney princesses and characters as well as explore the “happiest place on earth.”

McDaniel, a fourth grader who has seizures daily, went to Disneyworld the week before Christmas after Lubbock High School students surprised her with the trip last fall after raising the full $9,000 to grant the wish to her.

McDaniel and her mother Crystal Tobias said they were truly grateful for the opportunity they had to go to Disneyworld, thanks to Lubbock High School and the Make-A-Wish Foundation.

Foster, a kindergartener, went to Disneyworld a couple of years ago after she was diagnosed with a tumor at just seven months old.

Foster’s mother, Marlayna, said the trip came at a good time for Ardyn and their family and brought them closer together. Foster really wanted to go to Disneyworld so she could see the princesses and Doc McStuffins.

“The trip was so much fun and we are so grateful,” Marlayna said. “We love Make-A-Wish and happy they are bringing smiles to many children.”

The kindergarteners ended up raising the most out of all of the grades at Legacy. Teachers and administrators also brought money to donate as well.

Thank you to everyone who helped raised more than $2,000 for the Make-A-Wish North Texas Foundation!