FMS Chess Team Back to Back Grand Prix City Champions 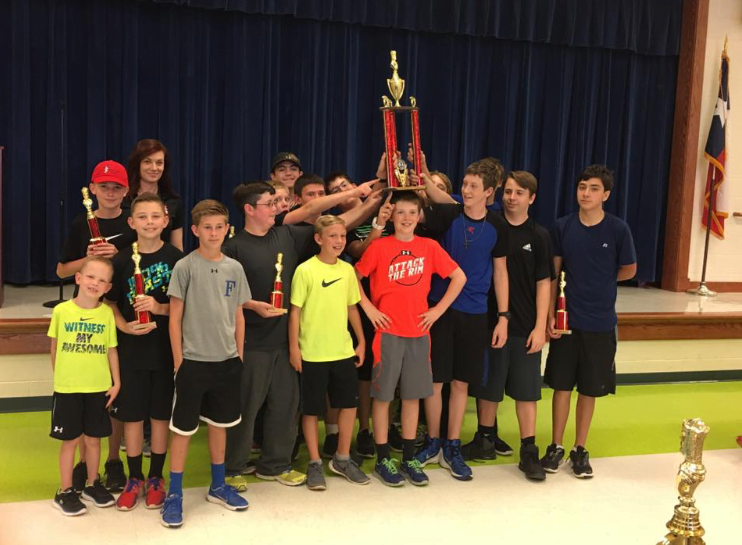 The FMS Chess Team participated in the 2016 April Check with Tech Chess Challenge on Saturday, April 23rd, 2016. Even though they had a smaller group than usual due to other events going on this past weekend, they still had the same results.

Frenship Middle School once again dominated the competition with a first place finish with 12 points to Heritage MS second place with 7.5 points. In addition to the first place finish FMS also had the first place winner in two different sections. In the K through 12 Rated section Chris Cashman went 4 and 0 in the tournament, defeating four quality opponents in his first tournament as a nationally ranked player.

In the unranked section FMS had three players tied for first and one player finishing in second place. The three players tied for first with a perfect score of four wins and zero losses were Deven Hollingsworth, Nate Hitt and Cade Salisbury with Zach Williams finishing in second with three wins and one draw. FMS has now won ten of the last twelve tournaments in the past two years. This is a tremendous accomplishment given the difficult task at playing chess against top competition from all around the region and New Mexico.

Last year FMS won the city championship by three points with 133 points to Evans 130. This year’s team is shattering all the previous year’s records finishing with a total of 223 points, defeating Evans by more than 120 points. This is a great accomplishment for the FMS Chess Team.

In addition to winning the Grand Prix City Championships for a second year in a row, FMS had one player win or tie for first place in every tournament this year. That is also a major accomplishment for a Chess Team. FMS will now celebrate their second city championship and will receive a well-deserved break before starting practice next August to defend their two time city championship title.