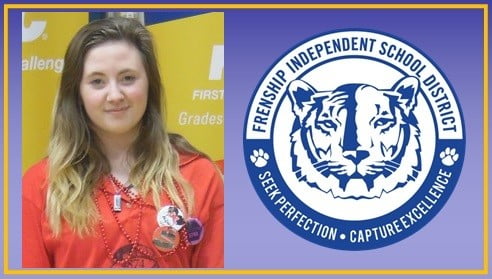 Congratulations to Frenship High School sophomore Alia Gill for her selection as one of 100 finalists from around the world for the FIRST Tech Challenge Dean’s List Award. This award recognizes the leadership and dedication of FIRST’s most outstanding secondary school students.

The ten winners of the award will be announced at the FIRST Championship Opening Ceremony on Thursday, April 23 at the America’s Center Edward Jones Dome in St. Louis.

Criteria for Gill’s selection as a FIRST Robotics Competition (FRC) and FIRST Tech Challenge (FTC) Dean’s List Award nominee includes, but is not be limited to the following:

-Demonstrated leadership and commitment to the ideals of FIRST

-Effectiveness at increasing awareness of FIRST in the school and community

-Interest in and passion for a long-term commitment to FIRST

-Overall individual contribution to their team

1.    FRC & FTC FIRST Dean’s List Semifinalists: the group of two students in their 10th or 11th school year nominated by each FRC or FTC team as applicable.

Gill and her engineering teammates were one of five Frenship Engineering teams that competed at the local FIRST Tech Challenge (FTC) in January. FTC teams of students are responsible for designing, building, and programming their robots to compete in an alliance format against other teams. Teams are required to develop strategy and build robots based on sound engineering principles and work with other teams in the competition to accomplish common goals.

Her team, “Frenship The Reel Deal,” were the winner of the “Connect Award” given to the team that most connects with their local and engineering community, and they advanced to the FIRST state championships in February.