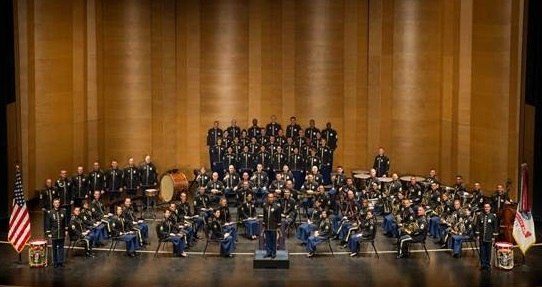 The Frenship Band invites to the community to come see the United States Army Field Band and Soldiers’ Chorus from Washington D.C. on Tuesday, April 18 beginning at 7:00 p.m. in the FHS Performing Arts Center.

The Concert Band and Soldiers’ Chorus are the oldest and largest of The U.S. Army Field Band’s performing components. Founded in 1946 and 1957 respectively, these two ensembles combine to present joint concerts on their national tours. They have performed in all 50 states and 30 foreign countries for audiences totaling hundreds of millions.

The 65-member Concert Band and 29-member Soldiers’ Chorus perform regularly in some of the most famous concert halls in the world, and just as often in the humblest auditoriums in the smallest of communities. The joining of these two ensembles allows them to offer unparalleled versatility of programming, ranging from orchestral masterworks and operatic arias to Sousa marches, jazz classics, and Broadway musicals. The band and chorus also perform independently, and have recently shared the stage with such ensembles as the Boston Pops, the Cincinnati Pops, the Detroit Symphony Orchestra, and the National Symphony Orchestra.

“As one of the premier military ensembles in the United States, we look forward to sharing a great night of music with you,” said Scott Carter, Associate Band Director at Frenship High School. “If you were able to hear the Marine Band that we hosted last October, then you know how well these concerts are attended.  Be sure to secure your tickets now for your family and friends.”

Complimentary tickets are limited so please reserve as soon as possible. Once tickets are requested online, an email confirmation will be sent. Tickets will not be mailed but will be available at the will call booth on the day of the performance.