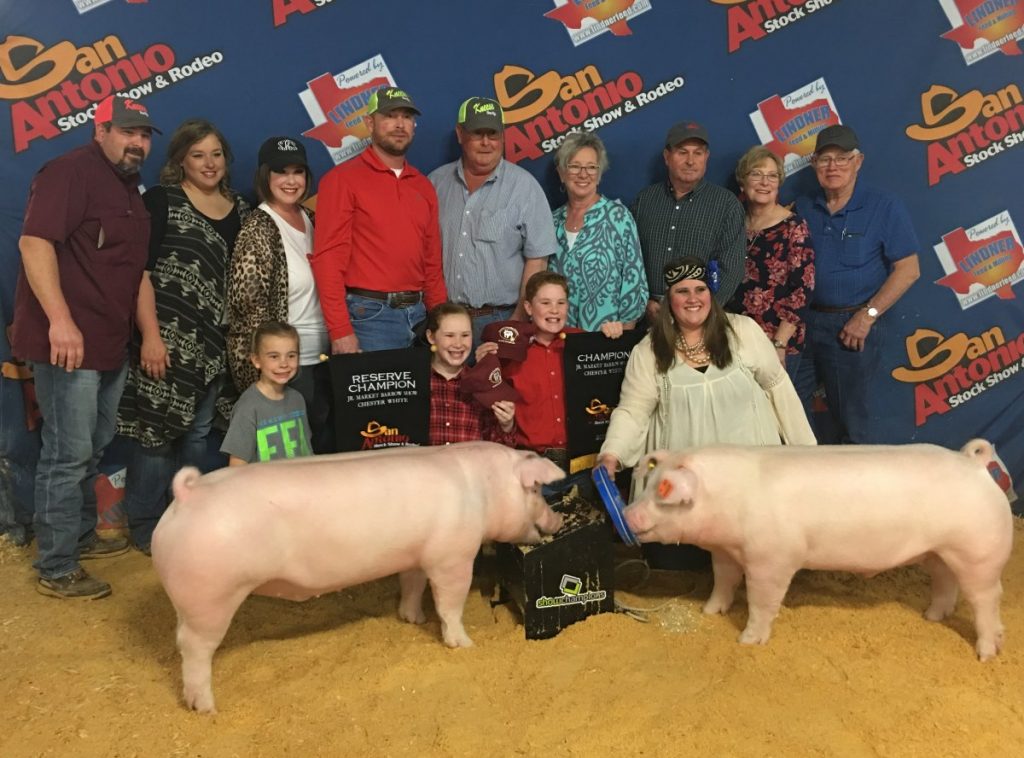 Saying Hudson and Hana Hutcheson were in hog heaven last week would be a huge understatement.

Competing at the San Antonio Stock Show – the largest pig show in Texas with more than 3,000 pigs entered in competitions – the sibling duo collected the top two prizes in the Chester breed division by winning the Breed Champion and Reserve Breed Champion awards.

Hana, a second grader a Crestview Elementary, made her San Antonio debut a memorable one. Showing in the lightweight Chester class with her pig Scorpion (a name she says matches his personality), she was selected as the class champion and advanced to the breed championship.

Hudson, a fifth grader at Crestview, and his pig Blanco (meaning “white” is Spanish) won the middleweight class and moved into the breed championship.

“It was pretty exciting for both of us to win because we’ve worked together and we know how much work it took,” Hudson said.

Now in the breed championship, Hudson and Hana found themselves in the ring competing against each other. But they didn’t concentrate on a budding sibling rivalry but rather found familiar territory between them – walking side by side doing what they love.

“I was very nervous because he usually wins,” said Hana. “But I also know this was a team effort.”

It was a proud moment for the tight-knit siblings. For months leading up to the show, the twosome traveled to their family farm in Slaton and spent more than two hours every day preparing their pigs for competition. Raising pigs has been a long-time tradition for the Hutchesons, a tradition that teaches responsibility, time commitment, and a love and respect for family.

And it’s why at the end of the day, Hudson, who was awarded the show’s top prize of Breed Champion Chester and earned a commemorative belt buckle and a $10,000 scholarship, said his most memorable moment was watching his sister join him in the end.

“My favorite part was after I won (the middleweight class), I got to watch the judge name her the (lightweight class) winner too,” he said. “I knew we had the two best Chesters.”