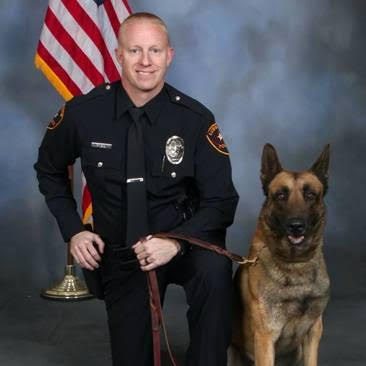 Purchase your tickets for the 8th Champions Breakfast

LUBBOCK, TX (February 15, 2017)—The American Red Cross of the South Plains will honor local champions for their heroic community service at the Champions Breakfast, 8 a.m. Saturday, March 4th at AeroCare, located at the airport south of the Silent Wings Museum.

In 2014 former champion, Kody Nesbitt won the animal champion award at the 7th Champions Breakfast. He mentioned in an interview with the Red Cross that, “He won basically for handling Pyro, the win was because of my police dog because it was like a secondary recipient. Being able to honor him was really awesome. I got to work every day with one of my best friends. I got to fight bad guys with my hero next me. It made me realize how lucky and fortunate I was to get to know him before he passed away.” Kody mentioned that the reason he became a police officer was because of his father. His father was also a K-9 police officer with a dog named Hiko. Just this past Saturday Officer Nesbitt has been training with a new dog and he had the opportunity to name him after his late dad’s K-9, Hiko.

Kody and others like him recognize the opportunity to assist others in their time of need.  It’s his tireless commitment to helping others that makes Red Cross’ disaster relief efforts and other programs possible.

Tickets for the event are $40 and can be purchased on the American Red Cross of the South Plains Facebook page under Champions Breakfast or by calling the Red Cross office at (806) 765-8534.

Proceeds from the event will support the South Plains Chapter of the American Red Cross and will be used locally for disaster relief and emergency services.

“This event is a great way to thank and honor our community members who give back in extraordinary ways” said Laura Hann, Executive Director of the American Red Cross serving the Texas South Plains.

About the American Red Cross:

The American Red Cross shelters, feeds and provides emotional support to victims of disasters; supplies about 40 percent of the nation’s blood; teaches skills that save lives; provides international humanitarian aid; and supports military members and their families. The Red Cross is a not-for-profit organization that depends on volunteers and the generosity of the American public to perform its mission. For more information, please visit redcross.org or cruzrojaamericana.org, or visit us on Twitter at @RedCross.