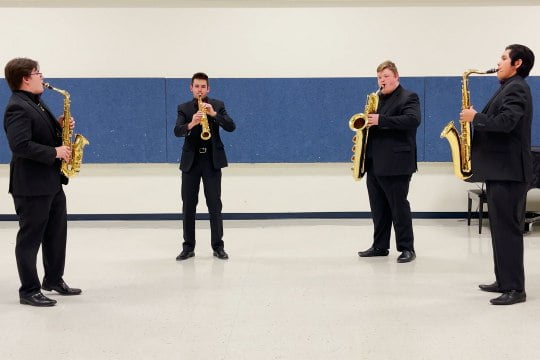 The Fischoff Chamber Competition is the nation’s most prestigious contest of its kind, often drawing in many international competitors. This is the first time any West Texas high school group has advanced to the quarter final rounds of the competition.

During a normal year, students would fly to Notre Dame, Indiana to compete in the live rounds of this competition. Due to the ongoing pandemic, the quarter final round will be held virtually on May 14. If any students advance into further rounds, they will compete during the semi final wound on May 15 and the finals round on May 16.

The chamber ensembles are small music groups consisting of three to six students. Students began the process at the end of the school year last year by devoting their time to rehearse several hours per week in addition to their already busy band schedules.

The chamber ensembles are listed below:

Frenship High School Assistant Band Director Jose Gonzalez is the coach for two of the chamber ensembles. He said that he is very proud of this honor and how hard the students have worked to achieve it.

“These students have pushed so hard for this. There were so many barriers along the way this year.

The sax quartet rehearsed incessantly,” Gonzalez said. “They were meticulous about their work and committed their entire 25-minute program to memory. This is something that even college aged groups would struggle to do, but Carmesí Quartet didn’t let that deter them from achieving this insane accomplishment. LdV Wind Quintet conquered some of the biggest hurdles I’ve ever seen any group struggle against. Throughout their process, students from this group were knocked out by the pandemic several times. That, paired with various other situations caused this group’s rehearsal time to suffer a bit more than the other groups. Axiom is the oldest group of the bunch with 4 seniors and 1 sophomore. Seeing 4 seniors, who have their whole lives in front of them, take on this monumental task has been heartwarming. Seeing those guys mentor their youngest member has been one of the highlights of this year for me.”

Gonzalez said that his students are anxious to compete and see how far they can go.

“The fact that all three groups are nationally competitive is beyond our wildest dreams,” Gonzalez said. “The kids are delighted to know that their hard work paid off and now they have the privilege of seeing themselves stacked up against some of the big dogs in the country.”