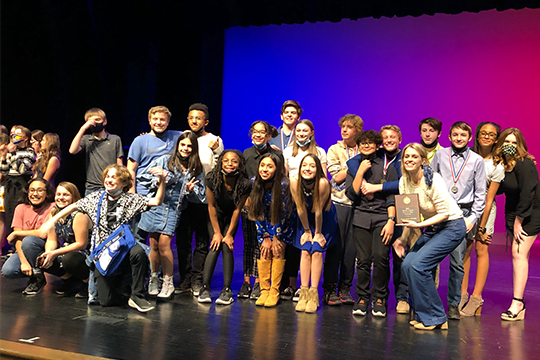 The play’s synopsis reads, “Reeling from her sister’s death, Beth suddenly finds herself journeying through a world suspiciously resembling the film The Wizard of Oz.  But with the yellow brick road sold to foreign investors after a financial meltdown, the Scarecrow reveling in his ignorant bliss, the Cowardly Lion acting like a paranoid sociopath, and the Tin Man embracing his emotional numbness, Beth wonders what role she plays in the classic story gone awry. A hilarious and heart-wrenching exploration of grief and perseverance on the road to acceptance.”

Terra Vista Theatre Teacher, Amy Fryar, said this year was different than most and that the students had to be on their toes during rehearsal and performance preparation process.

“We had students go into quarantine during rehearsals, so the students who were understudies had to be ready to jump in with little to no notice,” Fryar said. “I think that actually ended up making us stronger in the end because each student would have a different approach to their character and creating each character became a collaborative effort.”

“There was lots of jumping up and down and screaming, a few tears, and a couple of kids weren’t sure they heard right, so they weren’t sure how to react,” Fryar said. “For many of the students this was their first time to participate in One Act Play, so there was just shock and excitement all around. They didn’t really know what to say other than “I can’t believe we won!’”

Fryar said due to COVID, only she and the judges watched her students perform. She said during a competition the show is run completely by the students, so if there is a problem or dropped cue, they must figure it out on their own.

“Sitting in that audience, all alone, I witnessed solid leadership, teamwork, quick thinking, problem solving, and confidence despite the fears and nerves they were feeling,” Fryar said. “I couldn’t be prouder of this company, and I look forward to seeing what they do in the future.”

Four individuals were awarded for their outstanding performances in addition to the group’s first place finish: