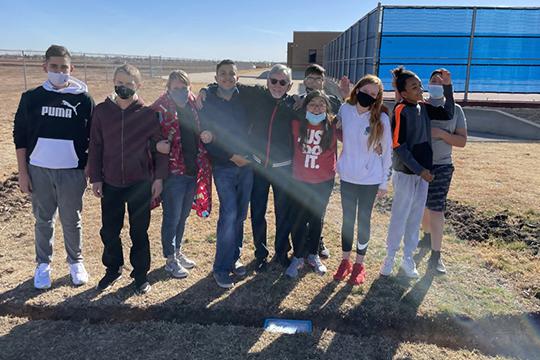 The students in the Life Skills class at TVMS put their memories of 2020 in a time capsule and reflected on the good and scary times from last year. 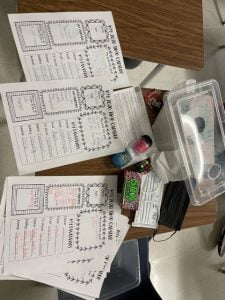 Stacy French, TVMS Life Skills teacher, said she wanted to do a fun activity to engage her students when they got back from the holiday break.

“I thought since 2020 was pretty epic, what better way to reflect than to put our memories in a time capsule,” French said. “I have done time capsules in the past and I thought the kids could really get into this assignment.”

French said she and her students researched time capsules, watched videos about time capsules and discussed what theirs would be like. She said after asking her student’s parents to assist with their decision on what to include in the time capsule, they were ready to start the project.

“The kids loved the idea,” French said “They enjoyed seeing some of the older time capsule videos being opened. It gave me an opportunity to bring in some history to the lesson as well.”

French said that she asked her students to bring something to put into the time capsule that they felt represented 2020.

“Of course, we had toilet paper, hand sanitizer, and masks, but one student brought a losing lottery ticket because he said it was an unlucky year,” French said. “Another student put in a Rubik’s Cube because he said the year was hard. Mr. Mike, our long-term sub, put in his doctor note showing where he had tested positive for Corona Virus earlier in the year. The kids enjoyed showing off what they brought and explaining why it represented 2020. We also completed a worksheet with just general information about the year.”

French said the day of the time capsule burial, she took her students out and found a spot close to the tennis courts.

“I thought it was our lucky day when we saw a trench,” French said. “So we put our time capsule in the trench and covered it. I thought this was the perfect spot, little did I know when I received a letter in my box that it wasn’t so lucky.”

“David was so kind and wrapped our time capsule in plastic and reburied it,” French said. “He placed markers on the spot where he buried it and left me a map to show exactly where it was. Our class got the biggest kick out if it and were so appreciative to David for taking care of us.”

French said the group made the decision to dig up the time capsule in 21 years on November 11, French’s birthday. Unless “there is another toilet paper shortage,” French said with a smile.

“It really gave us time to reflect on the year 2020, how we all went through a global pandemic together and how we all had ups and downs, but we made it through together and stronger,” French said. “It led us into making resolutions for this new year and what we wanted to focus on. I hope that this experience helped the students to not only think about their year but also how the country handled things can be a lesson for the future.”