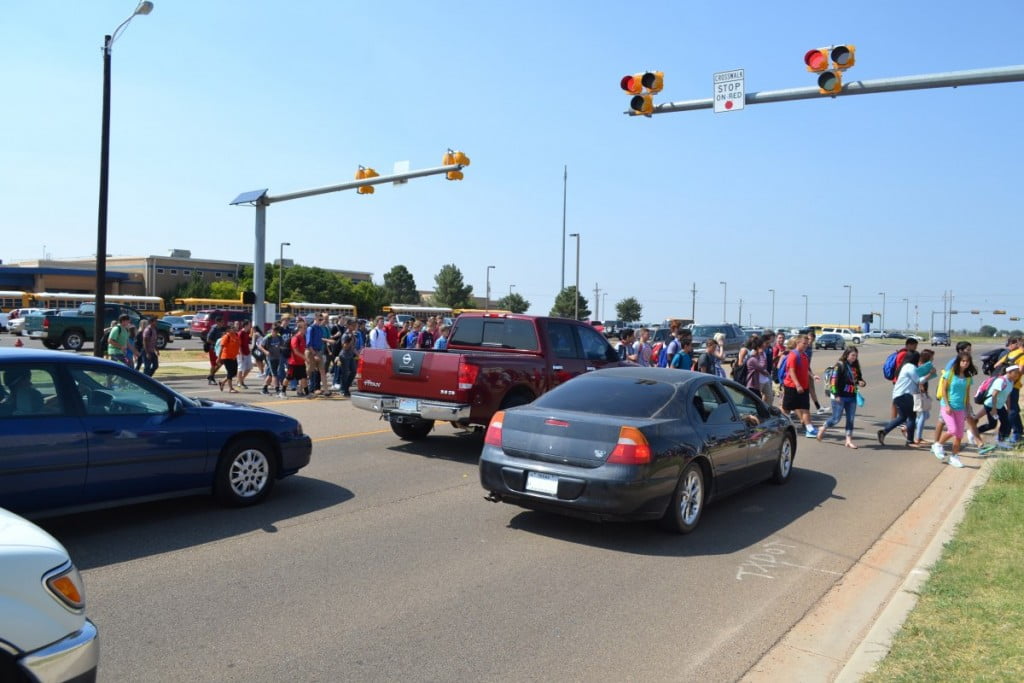 Frenship ISD has implemented a comprehensive safety measure to protect students who cross the street in front of Frenship High School with the addition of the HAWK pedestrian crosswalk system.

The HAWK system, located at the crosswalk in front of FHS on Highway 179, provides better communication between pedestrians and drivers who are approaching the intersection.

The lights of the HAWK system are illuminated when the system is activated by a pedestrian. The activation triggers the yellow warning lights above the street to alert oncoming vehicular traffic. After a three-second period of yellow lights flashing, the system then displays red stop lights to vehicles. It also alerts pedestrians that the intersection is safe to cross by displaying a pedestrian walking symbol near the base of each pole on both sides of the street.

Near the conclusion of the walking phase, pedestrians are shown an upraised hand symbol with a countdown display informing them of the time left to cross. When the countdown is complete, traffic is then released to move. The HAWK system has a 20-second delay before the light can be activated again.

Frenship ISD would like to thank the City of Wolfforth and TxDOT for their assistance in in implementing the HAWK system at Frenship High School.

TxDOT would also like to remind drivers of simple tips to help students reach school safely:

-Put away your cell phone. Cell phone use is banned in active school zones, and violators face fines of up to $200 in school zones where signs are posted.

-Drop off and pick up your children in your school’s designated areas, not the middle of the street.

-Keep an eye on children gathered at bus stops.

-Be alert for children who might dart across the street or between vehicles on their way to school.