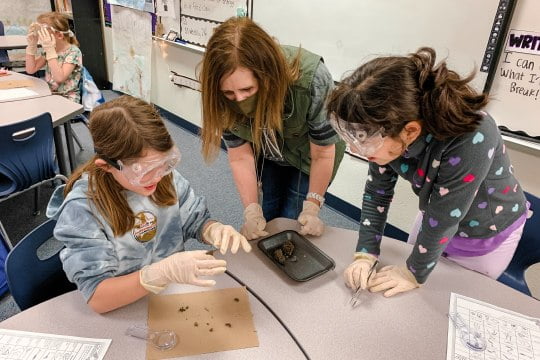 The students began the unit about food chains by watching videos in STEMscopes. They learned to match the flow of food chains, along with creating their own food chain posters. They read about owls and different animals to better understand animal energy sources prior to dissecting the owl pellets.

Shough said her class was nervous at first because they were not sure what to expect.

“After letting them know about the dissection experiment, the next day many of the students told me how they had visited with their parents about it, and that their parents had also dissected owl pellets along with frogs, and even baby pigs,” Shough said.

Shough explained that the during the dissection process her students used a chart with headings of rodents, birds, a shrew, and a mole. As the students found bones inside of the pellets, they placed them under the proper heading.

Shough said that her students were extremely engaged in the lesson.

“During the dissection you could hear ‘I found a mole skull,’ or ‘I found a jaw from a shrew,’” Shough said. “I also heard one girl say, ‘This is gross, but I kind of like it.’”

Shough said that her teammate, Latricia Mathis, was the one who discovered the project in a New to Content Workshop for Science. Mathis proposed the project to Shough and the two of them ran with it!

“A special project like this means so much to young minds and the hands-on opportunities are invaluable for their understanding,” Shough said. “They have many opportunities to watch videos and read books, but really when do you ever get the chance to cut open an owl pellet? These types of real-life experiences will stay with them forever, just like it did for their parents.”