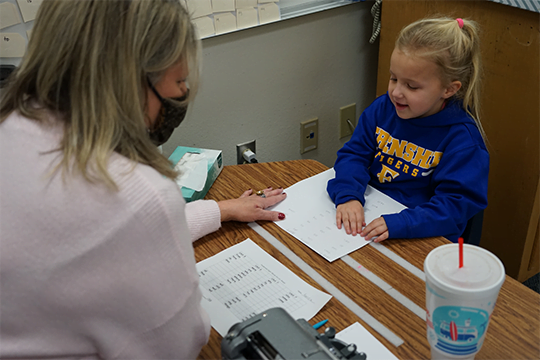 One Visually Impaired (VI) teacher at Frenship was inspired to help students through her son, who was born with cataracts. She, and her part-time colleague, instruct 20 VI students across the district.

Tracey Colburn is the District’s full-time VI instructor. She joined the Frenship family back in 2016 when the VI position became available, after working as an elementary teacher and VI instructor for different school districts.

Colburn said that several years ago when she began working toward her VI certification, she was inspired by her son.

“During my time as an elementary teacher, I realized how important a vision teacher really is to children that can’t see like the rest of our world,” Colburn said. “Our youngest son was diagnosed with congenital cataracts in both eyes and had surgery to remove them at nine months old.”

Colburn said that technology and medical practices were much different at that time.

“He went without lenses in his eyes for 16 years,” Colburn said. “He was the child with the coke bottle thick glasses and wore contacts at the same time and still he struggled in the classroom.”

Colburn said his diagnosis was what drove her to pursue VI instruction. She said she knew it was the right move when the job at Frenship became available.

“The VI department here at Frenship, and most other schools, is very small but makes a huge impact for so many students,” Colburn said. “We have a case load of 20 students, with three of those being 0-3 years old in the Early Childhood Intervention program.”

Colburn said that she works with students one-on-one that have been diagnosed with vision loss. She said that each day she works with each of her students curriculums and create the braille they need to learn.

“We have three full-time braille students and one that is dual print and braille,” Colburn said. “The others on the case load are either print learners or other tactile learners due to their disability.”

Colburn said that it was her personal experience that gives her the drive to ensure all VI students have a way to learn, just like their counterparts.

“Working with me son inspired me to look for better ways of helping him,” Colburn said. “That turned into me helping other students with the same, or even worse problems.”

Colburn explained that she is blessed to be able to help students excel and embrace their disability.

“I am not going to lie; this job is not a piece of cake,” Colburn said. “It takes a lot of work to keep up with classroom curriculum, but when I see these students excel in what they are doing and be on the same playing field as their sighted peers, it melts my heart.”