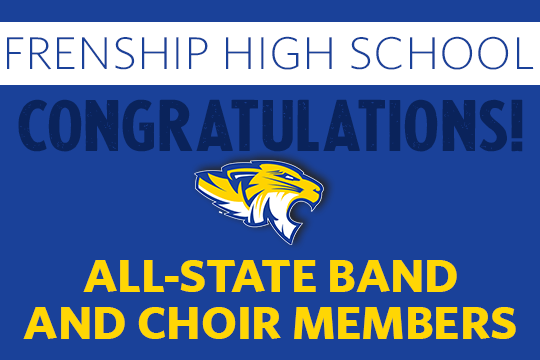 According to TMEA, over 50,000 students from around the state initially entered the audition process, and 1,860 students have been selected for 2021. This competitive process begins throughout the state in auditions hosted by 33 TMEA Regions. Individual musicians perform selected music for a panel of judges who rank each instrument or voice part. From this ranking, a select group of musicians advances from their Region to compete against musicians from other areas in eight TMEA Area competitions. The highest-ranking musicians judged at the TMEA Area competitions qualify for the TMEA All-State music group.

FHS Band Director, Ryan Smith, said that he has been working diligently to facilitate rehearsals for students that were wanting to try out for All-State band, while still trying to make sure students were social distancing.

“This meant that the students had to take more responsibility to learn this music more on their own than in previous years,” Smith said. “The auditions this year were done through audio recordings. The students had to play each selection in its entirety then decide to submit that recording or to record another take. If they decided to re-record, their previous recording was deleted. The recording process was a high stress scenario and all of them did a great job handling the pressure.  These three particular students have been very persistent in learning this music to make the best recording possible.”

FHS Choir Director, Amy Moss, said her students have done an outstanding job with all the new challenges that this year brought them.

“Though it has been frustrating, they have maintained a positive attitude and faithfully carried out the new requirements,” Moss said. “All while being challenged to learn some extremely difficult music. For this process, Choir followed a similar method as Band and completed their auditions through audio recordings. The students learned 2-4 collegiate-level pieces for each round of auditions. There were three rounds this year: Region, Pre-Area, and Area.  At every round, they submitted a 45-50 second excerpt of each piece they had learned for that specific round.  They did not know what the excerpts from each piece would be until the Saturday before they recorded each time.”

Both Smith and Moss said that the next competitions for their students are University Interscholastic League (UIL) Solo and Ensemble which start next month.

“We are all extremely proud of all the students that have participated in this All-State process whether they made the All-State group or not,” Smith said. “The process of learning this difficult music makes them each better musicians, and it is inspiring to see the success of these three band students. Not only did these students make the All-State band, but all three placed first on their respective instrument!”

“We are ecstatic for these three young women that made All State Choir,” Moss said. “It is a joy and an immense honor to be part of their journey!  Additionally, we are tremendously proud of all of our kids that went through this process. It is incredible to see the amount of musical growth that occurs in each student, but also the life-skills they learn. They gain confidence, learn to build great habits for success, and learn how to lift others up along the way. Many of our students are also in Godspell which opens January 28-31!”