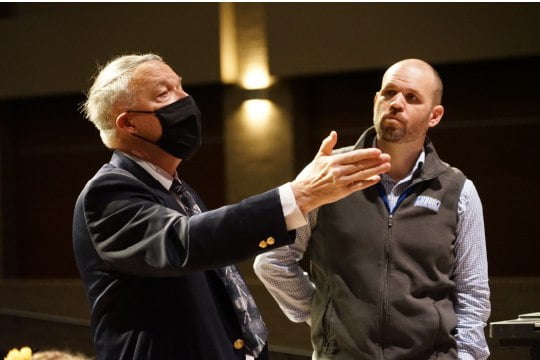 Palmatier spent more than 37 years as the Leader and Commander of the United States Army Band “Perishing’s Own,” the largest military music unit in the United States and was a senior musician in the U.S. Armed Forces.

Palmatier said he began his professional music career at the Crane School of Music in upstate New York. He said that because Crane was so focused on music education, it inspired him in his military career and throughout his retirement to reach out and work with students as well.

“Throughout my entire Army career, I worked really hard to stay connected with schools,” Palmatier said. “Wherever I was stationed I would go out and work with students, and while I was in the Army Band, we would always have students coming to visit us, and I was always the first one to say I wanted to go work with the kids. I guess it’s just where my heart has always been.”

Heritage Middle School Head Band Director, David Biel, said he connected with Colonel Palmatier a few years ago through a mutual friend when Palmatier was traveling through Lubbock. He said Colonel Palmatier came and worked with his students then, and he 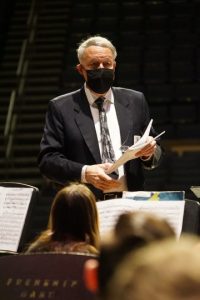 has been anxious to get him back in his band hall since.

It’s great to have clinicians come in because it gives our students a different perspective,” Biel said. “It also makes whatever we have been working on seem a little more legit.”

Biel said the best part of having such a distinguished guest is watching his students strive to get better.

“It’s really great to see the seniors over at the high school do so well with music, and I am trying to show my middle school kids how enjoyable this could be for their entire life,” Biel said. “Music is not something that will be a career necessarily, but it is something they can do for their entire life. These kids will grow up to be doctors, lawyers, stay-at-home moms and dads, and business people, but I want them to always have that love of music.”

Terra Vista Middle School Head Band Director Roel Sanchez said it was exciting to watch a masterful teacher come in and really grab his students’ attention. He said Colonel Palmatier reinforced things that he has been teaching all year and the students were very receptive.

“The moment that lightbulb would go on was really cool to watch,” Sanchez said. “We have been teaching things all year, but he would say the same things in different way and boom, they got it!”

Sanchez said Colonel Palmatier helped him learn some tools to become a more dynamic instructor and to teach from an artistic level and not a conceptual level.

“He helped us realize that we were lacking on the artistic level,” Sanchez said. “Now we know and now we can start implementing steps to help the kids approach that artistic level more often.”

Colonel Palmatier also worked with band students at Frenship High School. Head Band Director Dr. Ryan Smith said his students learned things that will be helpful while several of his students are looking to pursue a career in music.

“He praised their musicianship and great ensemble skills and intonation,” Dr. Smith said. “He challenged them to know more how their individual parts fit into the whole picture of each piece we are performing. To not only know their individual part, but how that part relates to everyone else’s part and how to become a more cohesive ensemble.”

Dr. Smith said he grew up listening to the U.S. Army Herald Trumpets, and that Colonel Palmatier was the director of that group. He explained that having Colonel Palmatier conduct was a special moment for him and his students.

“It was an honor to listen to his amazing stories his interactions with past presidents, members of congress, international dignitaries, and how he was a part of many of historical events,” Dr. Smith said. “It was great to see such a storied musician be able to relate so well to students of all different levels of musicianship.” 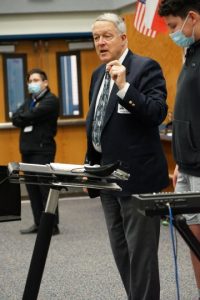 ng with and conducting for some of the Heritage Middle School students Colonel Palmatier told a story about when he was in their shoes.

“My life changed when I was in seventh grade because my music teacher saw something in me and helped me change direction that gave me the life I have now,” Palmatier said. “If he had not been as caring, involved and knowledgeable as he was, I don’t know what my life would have turned out to be.”

“You can see the progression,” Palmatier said. “You can see the work done at the middle school level with a continuum where all the directors are working together and it is just really great to see a continuum of their education. I don’t know if that exists in other departments but I see it here in the music department at Frenship and it is really inspiring.”

Palmatier said the people that have left a lasting imprint on his life are the ones that he could tell had passion and drive to do what they love and in his travels as a clinician he hopes to leave that same lasting inspiration.

“If I can come in here at 66 years old and show the kids how getting up and dancing can help them play the music more effectively, or if I am enthusiastic and excited it could show them ‘gosh, you can have an entire life where you are excited about something,’” Palmatier said. “I jump out of bed every morning and think about how I can’t wait to go an be a band guy. I feel pretty lucky, and if I can show them how exciting it is to be a band guy, that works for me.”