Frenship Alumna Competing on “The Voice” 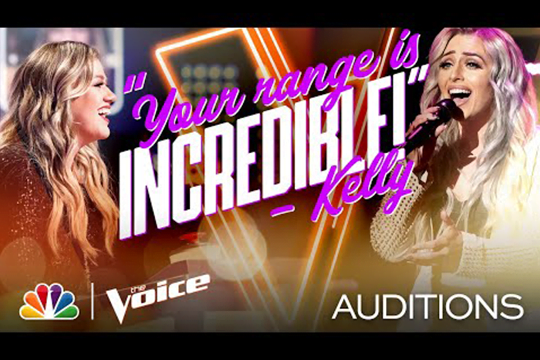 Kelsie Watts recently performed for the blind auditions round of the singing competition show, The Voice. Her performance turned the chairs of Kelly Clarkson and Gwyn Stefani, but it was Team Kelly that Watts selected.

Kelsie grew up in Lubbock and began attending Frenship schools in the eighth grade, and she graduated from Frenship High school in 2009. Kelsie then went on to attend Belmont University in Nashville, Tennessee, where she studied music.

Kelsie said that it was her time at Frenship and at Belmont that taught her the most about performing and hard work.

“I absolutely loved my time at Frenship,” Kelsie said. “Frenship was the first place I auditioned for anything.”

“She began singing in church choirs while still in preschool and as early as third grade, set her sights on making music her career,” Michelle said. “Every decision she’s considered since then has been made with that goal in mind.”

Kelsie was a part of FHS All-State Choir, All-Region Choir, and Solo and Ensemble. She said that being involved in those organizations prepared her for what she is doing now.

“It taught me how to give a great audition to make the cut,” Kelsie said. “I learned what hard work meant and how to be disciplined in my craft – that work ethic is a large part of why I am where I am today.”

“Throughout middle school and high school, the amazing music faculty provided numerous opportunities for her to hone her craft,” Michelle said.

Michelle said she is amazed at how far her daughter has gone since her time at Frenship.

“Throughout the years I have watched Kelsie grow as an artist and I couldn’t be more proud of her accomplishments,” Michelle said.

Kelsie said a producer from “The Voice” approached her back in January and asked her to audition.

“I actually wasn’t going to audition because I’d been asked to so many times before and wasn’t cast,” Kelsie said. “I guess it was the right time, because they cast me on the show!”

Kelsie performed in the Blind Audition round by singing “I Dare You” by Kelly Clarkson! She said she wanted to take a risk and see where it would get her.

“It’s been an absolute blast and I’ve worked with some incredible artists,” Kelsie said.

Kelsie said that now that the Blind Audition round is complete, the next step is the Battle stage of the competition.

“This round the artists are paired up within their own team and assigned a song to perform as a duet,” Kelsie said. “At the end, the coach decides who stays and who leaves – talk about terrifying!”

Michelle commented about Kelsie’s success so far, “We are also beyond thrilled to watch her compete on The Voice!  It is so exciting and truly surreal to see your child blessed with such an amazing opportunity, and even though we’ve heard her sing since she was tiny, we are still continually amazed at the talent God gave her.”

The Voice airs every Monday and Tuesday, and that the Battle rounds will begin airing on Monday, November 9.