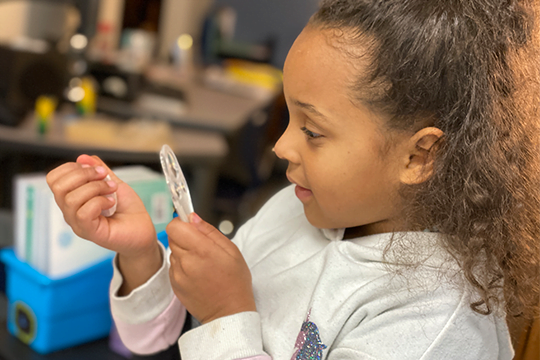 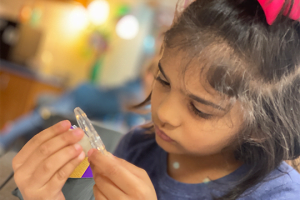 Kendrick said she wanted the students to have an engaging aspect to this unit. She said she believed that this project would help bring a unique perspective of rocks to the students minds.

“I wanted students to have a hands-on experience and be able to feel and see how the rocks were different and how they were similar,” Kendrick said. “A variety of rocks were used from our campus science lab. The rocks varied in size, shape, and texture. I also asked students to bring back rocks that they found at home. Students were encouraged to ask a parent or grownup to help them find unique rocks to bring back to class.”

Kendrick said that on the day of the rock investigation, students started off by sorting their rocks.

“Students were able to sort rocks in a variety of ways,” Kendrick said. “Students independently determined how they wanted to sort their rocks – some students decided to sort by size or shape, while other students sorted their rocks by texture.” 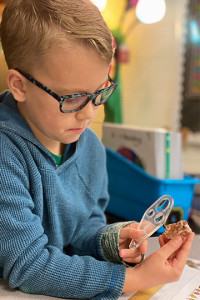 Kendrick said that the students were then able to identify different characteristics about the rocks.

“Students were able to identify rocks that had weathered by water or natural elements,” Kendrick said. “I just let the students go with this project. I walked around and let them explain their reasoning and I was very impressed with their reasoning and knowledge.”

Kendrick explained that she believes special projects like the rock investigation project allow students to learn from not only doing but also teaching their fellow classmates.

“Students were also able to teach one another and participate in discussions with one another during this activity,” Kendrick said. “I did very little talking during this time, students took the reins and really soared with it. It was so amazing to listen to them and it made me very proud to be their teacher!”