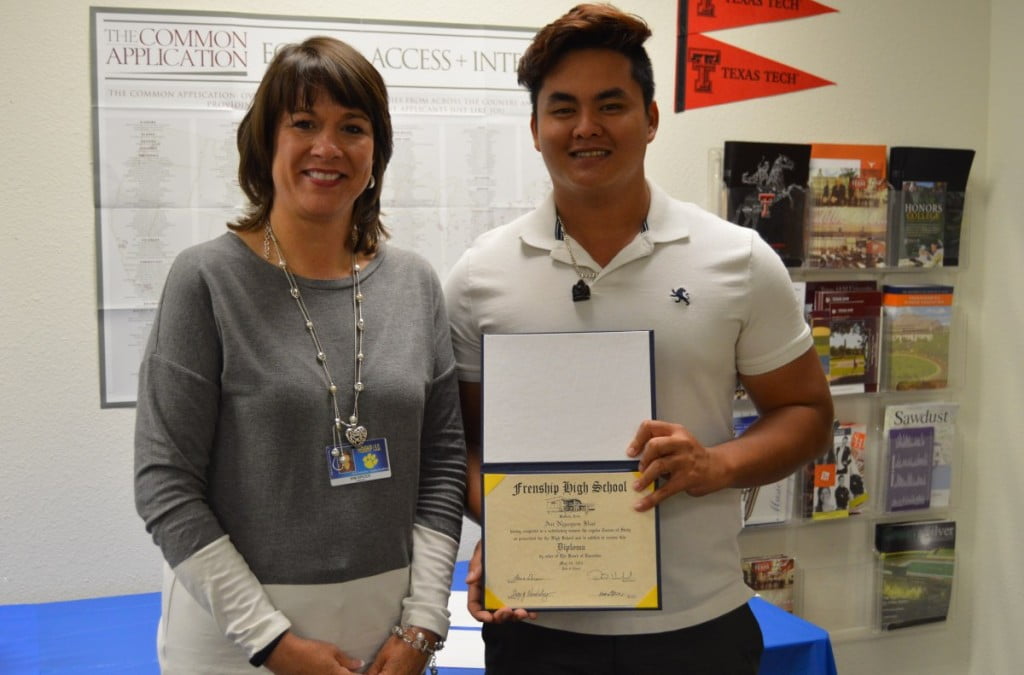 Imagine being a high school student moving to a foreign country not knowing how to speak the native language.  Imagine the challenge ahead trying to not only learn the language and the culture of your new surroundings but also having to meet the educational expectations.

That was the challenge Frenship High School student An Bui faced three years ago when he moved from his native Vietnam to Wolfforth.  He spoke no English.  The challenge to meet high school graduation requirements lurked ahead.  It was a difficult transition.

But Bui, with the help of the Frenship High teachers and staff, pushed forward.  In May 2014, Bui completed all of the required course work needed for graduation.  All that was between Bui and graduation was passing all four EXIT level TAKS tests.

But in his first attempt, he had only passed Social Studies.

“One of the hardest things I have to do as the high school principal is to tell kids they don’t get to graduate due to state testing requirements,” said Kim Spicer, FHS Principal.  “Some of these kids have given everything they’ve got just to master the required course work.   An was one of those students – always smiling, worked hard, never complained – just an awesome kid.  Telling him he wasn’t going to graduate was one of the toughest conversations I had last year.  He was devastated.  He felt he had failed and disgraced his mom.  He was ashamed to go home and tell her.”

A week later, Bui promised Spicer and FHS counselor Julie Pratt that he would continue to try.  In July 2014, he took the remaining three tests again.  This time, he passed English Language Arts (ELA) and Science, but he still hadn’t passed Math.

But Bui and the FHS staff refused to quit.  Bui continued to come for tutorials. When frustration set in and he missed a few sessions, FHS math teacher Deanna Tapley would go to the shop where he worked with his mom and remind him that he still had a test to pass.

Bui returned in December 2014 and retested Math a third time.  The result was the same.

Bui’s perseverance remained, but frustration began to set in as well.  Another opportunity to retest came again in March.  Bui told Mrs. Spicer “This was it. If he failed again he wasn’t going to try again.”

This time – the fourth time – the result was different.  After months of unceasing study and with the support of those around him, Bui’s perseverance paid off with a passing score in Math, the final hurdle to complete high school graduation requirements.

On Monday, April 13, Bui, surrounded by his family and school staff, received his diploma from Frenship High School.

“It was truly a team effort and I am so very, very proud at the perseverance and tenacity shown by An,” Spicer added.  “If he’d given up it wouldn’t have mattered what the adults around him did or said.  But he kept trying and kept trying and ultimately was able to succeed.  His story should serve as an inspiration to others.  Lots of people struggle.  Lots of people give up.  An didn’t and now he has a high school diploma to prove it.”