Aidan’s Path to Braille: A New Way of Learning for the Visually Impaired 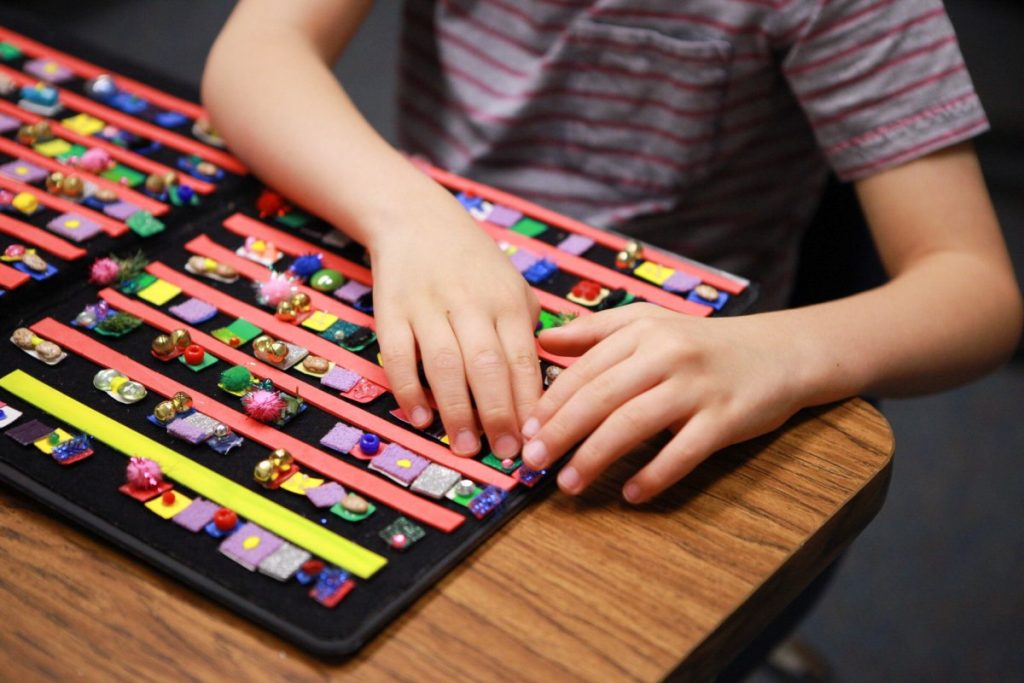 By using sensory textures, Aidan Noyola, a 9-year-old boy who was born with no sight, learned how to read and write through nontraditional measures created by Frenship ISD teacher Sherry Airhart.

Sitting in a room at Bennett Elementary, Frenship ISD teacher Sherry Airhart and 9-year-old Aidan Noyola are working on his reading and writing skills.

Airhart said Aidan has made leaps and bounds in his learning since she’s known him. Whenever she began working with him, he was only two.

It’s just another typical day in the life of Aidan. He takes piano lessons, loves music, learning, making jokes, spending time with his family and more. But what makes him so extraordinary is that he accomplishes all of these things without any sight.

Over the past seven years, Airhart and Aidan have become one dynamic duo as she has been teaching him how to read and write, while learning the braille code.

It came with hard work, determination and a little bit of creativity, but the two have made a great team as Aidan has made abundant strides in his learning.

It all starts at the beginning though, at the very start of Aidan’s life.

Starting young
Before he was born, Aidan was diagnosed with septo-optic dysplasia while his mother, Stephanie, was pregnant with him. Septo-optic dysplasia is a disorder of early brain development that causes the underdevelopment of the optic nerves, abnormal formation of structures along the midline of the brain and hypopituitarism.

Stephanie said they knew Aidan would have a chance of vision loss, but it wasn’t until he was born that they found out he had no sight at all.

Despite having no sight, Stephanie said Aidan was always such a happy baby and is still always smiling today.

One thing Aidan picked up on at a very early age was music. Stephanie said that from the very beginning of her pregnancy she constantly played music with all of her children, especially classical music.

At the age of two, Aidan would babble all of the time as his version of singing, and over time Aidan’s love for music continued to grow, even to the point where he could make up his own beats just by using his hands and coming up with songs off the cuff.

“He is all auditory,” Stephanie said. “He even can come up with different melodies to songs while listening to them. It’s his favorite thing.”

Although Aidan was excelling at recognizing sounds and music, one thing Stephanie and her husband, Greg, noticed was Aidan’s slower progression in his physical development, due to the septo-optic dysplasia.

At birth, they began participating in the Early Childhood Intervention program where Aidan would work with an occupational therapist and later a certified visually impaired teacher, also known as Airhart, when Aidan was two.

Airhart worked often with Aidan, but it wasn’t until he began his elementary education at the age of three when they really started their work together at Bennett Elementary.

The breakthrough
Over time Airhart and Aidan worked on many different things, but as Aidan continued to progress, they moved onto reading and writing with braille when he was seven years old.

A braille cell can be used to represent a letter of the alphabet, number, punctuation marks, part of a word or even a whole word.

“It is a very abstract concept,” Airhart said. “Which is why it is very hard to learn, regardless if someone who is visually impaired has other disabilities or not.”

This is where the challenge emerged for Aidan and Airhart.

While Airhart was trying to teach Aidan how to write his name with the braille code, it was hard for him to get the hang of it since it is so abstract.

“I just racked my brain trying to figure out different ways to help Aidan learn how to write his name, but nothing was working,” Airhart said. “I just prayed, asking God to help me find a way to teach Aidan in a way that would work with him.”

Soon after, she had an idea.

With a little bit of creativity, Airhart began using small items like pipe cleaners, bells, paper, sponges, beads, beans, ribbon and more to make her own braille code for Aidan.

She came up with a variety of textures to emulate the braille code and began associating certain textures with letters, numbers, words and punctuation marks.

Airhart then attached the textures to a kid-friendly keyboard to begin teaching Aidan how to write his name.

“He wrote his name the first day we used the textures on the keyboard,” Airhart said. “I was absolutely amazed.

“We had been working so hard together trying to learn how to write his name with the braille code and it just wasn’t working, but as soon as we began using the textures, Aidan picked it up right away and he had no trouble at all.”

There it was. The breakthrough.

With Airhart’s new texture system, she began applying it in other areas of Aidan’s learning, including math, reading and even the braille cell.

Airhart’s creativity with the textures has paid off for Aidan and herself as their success recently was recognized.

In March, she received the Julia L. Young Award from the Texas chapter of the Association for Education and Rehabilitation of the Blind and Visually Impaired, which is awarded to an individual who provides leadership in the development of the visually impaired and has done outstanding work in this field.

Airhart said she is in awe for receiving this reward and that none of this would be possible without the support of Aidan’s family and the teachers and administrators at Bennett Elementary.

“I am just so thankful to have received this award,” she said. “Working with Aidan was the motivation behind it all, and seeing him succeed on his path to learning braille has been everything. I hope this way of teaching for the visually impaired will catch on with other teachers and students to help them learn the braille code and excel in their education.

Stephanie said teachers like Airhart that have such passion and drive are hard to find.

“Sherry has been such a blessing to Aidan and our family,” she said. “Without Sherry, Aidan wouldn’t be reading and writing, but it’s because of her that he is doing these things. She loves her students so much, you can count on her and she never fails to go the extra mile.”

Bennett Elementary Principal Michelle Elliott said there is no one more deserving of this award than Airhart.

“Her willingness to think outside the box and to assimilate, adjust and modify instructional practices to meet the needs of Aidan and all of her students truly sets her apart. Teaching is not business as usual for Sherry. She has great intuition and follows her instinct when serving her students.”

Going forward, Airhart and Aidan will continue to work on his braille skills while using the textures.

Both Airhart and Stephanie see a bright future for Aidan as he continues to succeed.

“Aidan is just so smart and can remember everything,” Stephanie said. “He is so happy and witty, and I wouldn’t trade him for anything. Aidan has been such a blessing to our lives and I am just so thankful to see how he has succeeded in his learning over the past seven years he’s been working with Sherry.”