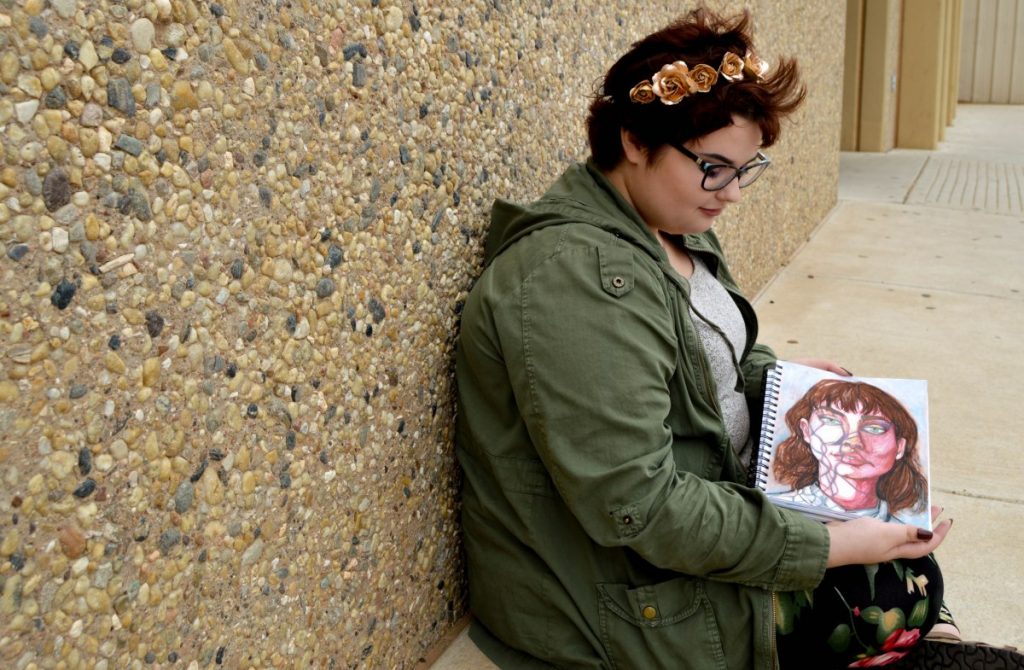 September is Childhood Cancer Awareness month and a Frenship High School student is using her talents to share her story.

When avid artist Delainey Kendrick started her freshman year at Frenship High school, she didn’t know that her 9th grade experience would only last for a month. Kendrick was diagnosed with Hodgkin’s lymphoma just weeks into her first year of high school.

“I found it myself, actually,” explained Kendrick when asked how her diagnosis came about.

“I’m constantly sketching during class. I was drawing the shoulders of a person and reached up to feel my own collarbone to better understand how to draw the shape,” she said as her hand moved toward the scar that now spans her left collarbone.

“I knew something wasn’t right. I could feel a mass and spurs coming off of the bone. Within two weeks of finding it I was pulled out of school and hooked up to chemo.”

After four months of chemotherapy and several more months of recuperation, Kendrick is back in school as a sophomore at FHS.

Despite her recovery, Kendrick hasn’t put cancer behind her. Instead, she wants to bring cancer into the spotlight.

“When I was in the hospital, I would walk down hallways filled with kids who were in a fight for their lives,” recalled Kendrick.

“After I came back to school, I was in hallways filled with kids again. But it was so different. None of them experienced what cancer is really like. They’ve never seen a six year old crying for chemotherepy to stop because the child doesn’t understand that chemo is the only thing that can save them. They had no idea what it was like to see cancer affecting kids and their families every day.”

In order to change her peers’ perspective of cancer, Kendrick turned to her passion: art.

Kendrick’s recent artwork focuses on the reality of cancer. Her sketchbook is filled with awe-inspiring drawings of children undergoing chemotherapy, abstract renditions of cancer itself, and self-portraits that depict her own experiences with cancer.

“When you see advertisements for the fight against childhood cancer, it’s always pictures of smiling bald kids,” Kendrick stated with a sharp edge in her voice.

Kendrick shared several of her drawings, including this piece depicting the bird’s-eye view of a child who is battling cancer. When asked about her goals for her artwork, Kendrick sat up strait in her chair to explain.

“In a way, my art makes it feel like I have a way to get back at cancer. I want people to see what cancer really looks like, so they can understand how important it is to fight it.”