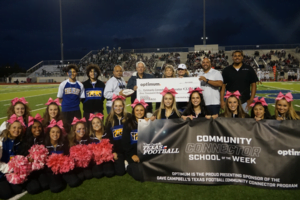 Congratulations to Randy and Luann Curry, who were recognized with the Community Connector Award from Dave Campbell’s Texas Football and Optimum.

Randy and Luann Curry, a husband-and-wife photography duo, are staples across the Frenship community. If you’ve been to a Frenship sporting event, graduation, or performance, then you have probably spotted them in the background taking photos and capturing special memories of the students.

“The pictures we took of kids all those years ago – now we’re taking their kid’s pictures,” said Randy. “People tell us, we can’t believe you’re still here,” laughed Luann.

But their Frenship journey began long before standing on the sidelines to snap photos. The two are Frenship graduates and so are their children.

Luann got her start with photography as a hobby in the 1990s taking pictures of her own kids at their Frenship sporting events and club activities. When she was asked to take graduation photos in 2000, she and Randy figured out how to make it happen, and they have been doing them ever since.

“We love our community, and we just feel very blessed to capture the history of it,” said Luann. “We don’t feel like it’s a job by no means. We just enjoy doing what we do. It’s all about the kids for us and watching the kids be successful.”

As former Frenship parents, the Currys want to be able to capture photos for the parents who don’t have the ability or access to take the photos themselves. From the starters and student trainers to the band and theatre students, the Currys are dedicated to capturing memories for all students. They know how much hard work goes into every single part of each game and performance, and they want to highlight every student involved in the many Frenship programs.

“We don’t just take photos of the kids. A little pat on the back or picking someone up on the sidelines and saying you’ll get them next time – that goes a long way,” said Randy.

In addition to offering parents the opportunity to access photos of their students, the Currys also provide photos of the students to the coaches for media opportunities, posters, and for the yearbooks. Everywhere you look, from the stadium and locker rooms to the high school hallways and offices, you’ll find their work.

“Here at Frenship we use something called the SERVE model, the Frenship way, and they exemplify what that stands for,” said Frenship High School Principal, Greg Hernandez. “We talk about the Frenship Way and how you should smile, engage, respect, volunteer, and encourage and the Currys are all of those things. Others should strive to be what they represent.”

Head Frenship Football Coach, Jay Northcutt said that he immediately thought of the Currys when asked to nominate someone for the award.

The Currys were selected to receive this nomination for all of their hard work, dedication, and service to the Tiger community. As a part of this recognition, Optimum presented the Currys with a commemorative football and will make a $1000 donation back to the Tiger program in their names.

“We’re just overwhelmed,” said Randy. “This is our home. We are Tigers and we bleed blue and gold, and we feel very blessed to capture the students hard work,” added Luann.